Clallam County Public Utility District #1 is directed by a three-member Board of Commissioners elected by citizens of the county. For more information please review how the commissioners work with the PUD.  For Commission meeting notices and minutes of past meetings click here.

Commissioner Districts Represented
The District map will help you find which Commissioner represents your district. This is easiest if you know your voting precinct. Precincts within the City of Port Angeles utility service area are not included. Click on the map to open a larger version. 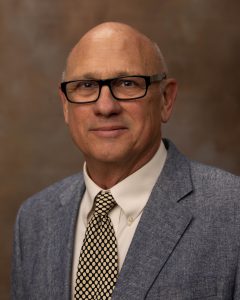 Ken’s education includes the University of Washington Fine Arts and Architecture programs and a year of study at the Royal Academy of Art and Architecture, Antwerp Belgium.

Ken is a registered and licensed architect with a practice based in Sequim since 1988.

Ken’s public service includes two terms on the Sequim City Council from 2008 to 2016, serving as mayor from 2010 to 2014. As mayor his accomplishments include driving the downtown sub-area plan forward, acquiring the city’s first bond rating, and building the new Civic Center. During his tenure Ken achieved his Advanced Certificate of Municipal Leadership.

Other public service includes the Sequim Planning Commission, Clallam County Economic Development Council Board, including a term as president, and the Sequim Boys and Girls Club Financial Planning Board.

Commissioner Paschall was elected to the 2nd PUD District on November 3rd, 2020 to serve a short term from December 1st through December 31st, and then taking a second oath of office to begin his full 6-year term on January 1, 2021. He has over 30-years of electric utility experience in the Pacific Northwest.   With experience including power supply, compliance, utility management, and participation in regional utility workshops, forums, and conferences, Commissioner Paschall brings a robust portfolio of knowledge to the District.  For twenty years, he provided technical expertise for public power general managers at the Pacific Northwest Generating Cooperative (PNGC) and served for ten years as Vice-Chair of the Western States Power Pool , four years as Steering Committee member of the Western Interconnection Compliance Forum He holds an MS in Economics, and BS in Mathematics. Commissioner Paschall resides in Port Angeles with his wife, Connie, and rescue dog, Henry. Jim Waddell was elected to office for the term beginning January 1, 2019. Jim Waddell is a Civil Engineer who is retired from a 35-year public service career with the U.S. Army Corps of Engineers. For over twenty years of that career he has been a leader in developing the policies and practice of Sustainable Development. He also served with the Environmental Protection Agency and the National Science Foundation (NSF). Jim’s work with the NSF and then as the Senior Policy Analyst for the Environment in the White House office of Science and Technology Policy was largely focused on climate change policy, budgets, and research integration. He was the first in the Federal Government to identify and integrate all the global warming research programs allowing scientific information to better inform National and International policies. During the early stages of his career, Jim Waddell was an officer in the Army National Guard, serving in Engineer, Signal, and Transportation units.

The Commissioners set utility policies and hire a General Manager to implement those policies.

Commissioners’ meetings are open to the public and start at 1:30 p.m.  Meetings are held the 2nd and 4th Mondays, monthly, at the PUD boardroom in the Carlsborg Main Office office, and via Zoom.

Agendas are available prior to meetings here and also at each meeting.

Board positions of President, Vice President, and Secretary are established by the commissioners themselves on December of each year, following an election, for the ensuing two years.